I don’t know about you, but I’ve just about hit my limit on winter. I woke up to yet another single digit morning, and here on Lake Michigan it’s a different feel than single digit mornings in Montana. The cold air here chills me to the bone, it hurts to go outside. Last year in Montana I felt like single digits were uncomfortable, sure, but not unbearable- I could run outside in my shirtsleeves to warm up my car without too much fuss. Now to go start my car (which is mercifully parked much, much closer) I throw on my down parka (hood UP) and mittens, give myself a little pep talk, and take a deep breath before throwing open the door because I know I’m not going to breathe again until I run back inside. And it’s the same temperature! Is it the humidity? The lake effect? The wind? Whatever it is, I’m over it. There are a couple of lights at the end of this polar tunnel: we’re going to Atlanta next month for my cousin’s wedding and in June we’re going to Mexico to celebrate a dear friend who’s graduating from grad school (that feels redundant, is there a better way to say that?). There is sunlight in my future.

What I wouldn’t give to have someone, though, poetically reminding me of the feeling of warmth on my skin, of the colors of sun and grass and flowers…someone, perhaps, like Frederick. 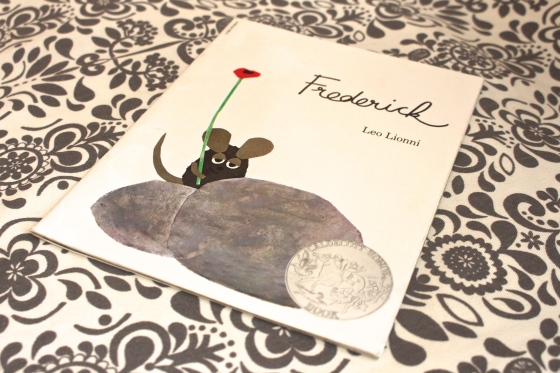 Leo Lionni’s 1967 Caldecott Honor winning book, Frederick, is about five field mice who are preparing for the coming winter. Four of the five mice are gathering seeds, nuts, and what have you to stockpile for the impending cold months. One however, sits quietly to the side, seemingly just not pulling his weight. 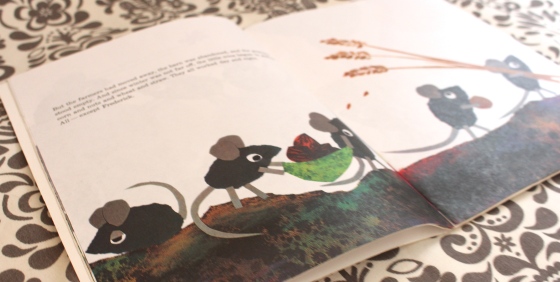 But Frederick is indeed doing something just as important. 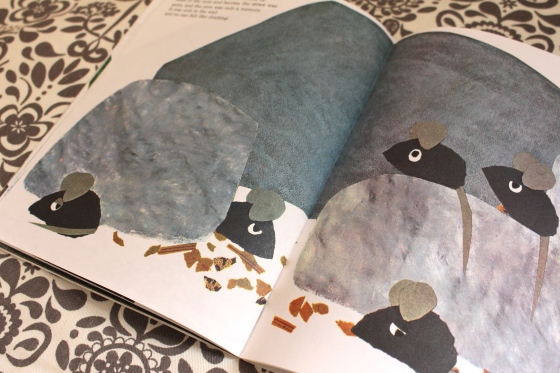 Eventually, the mice find themselves in the cold, dark rock wall in the dead of winter having exhausted their stores.

But little by little they had nibbled up most of the nuts and berries, the straw was gone, and the corn was only a memory. It was cold in the wall and no one felt like chatting. 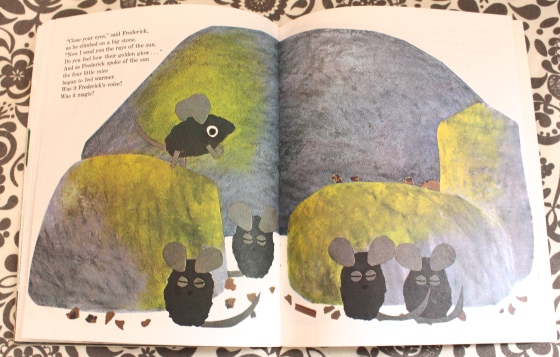 “And how about the colors, Frederick?” they asked anxiously. “Close your eyes again,” Frederick said. And when he told them of the blue periwinkles, the red poppies in the yellow wheat, and the green leaves of the berry bush, they saw the colors as clearly as if they had been painted in their minds.” 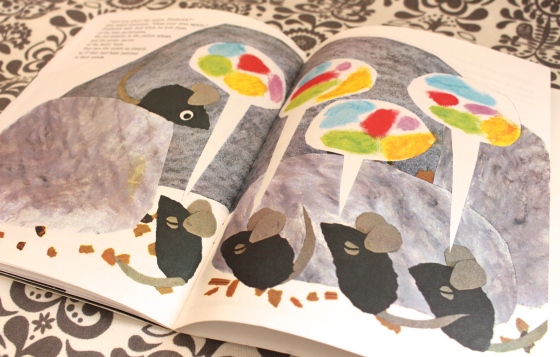 What I love so much about this book is the message that everyone has a valuable role to play, even if the supplies we gather are words, images, and emotions. The dreamers and romantics of this world are just as necessary as the toilers and the creators. Our bellies must be fed, but so must our hearts.

Leo Lionni’s books, with his brightly colored cut-paper collage technique, bring me back to my own childhood- remember Swimmy? Little Blue and Little Yellow? What are your favorite hits of nostalgia?

These aren’t book reviews, per se, but more profiles of the really, really good ones (I don’t bother with ones that aren’t awesome). Recommendations, really, for which I am not compensated. If you’re looking to buy any of them you can click on the the links and cover photos in each post, OR you can click on the little box over there on the right that says “amelie’s bookshop (buy the books)” and it will take you to my Amazon Affiliate store- you’re buying them as you normally would through Amazon, except that I get a teeny tiny commission. Or even better, walk on down to your local independent bookseller and support them.

Please check out my Facebook page if you get a chance, I post a lot of fun stuff there.

8 thoughts on “Frederick, by Leo Lionni” 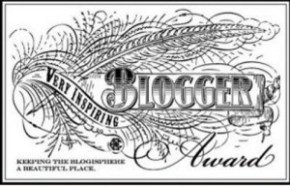 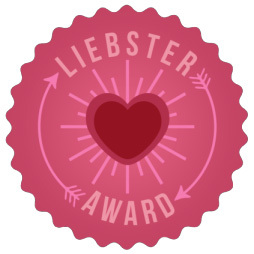